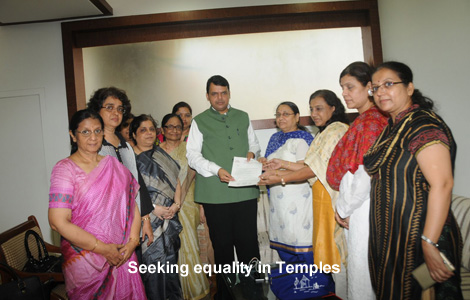 A Shani temple in Maharashtra’s Ahmednagar district was cleansed ceremonially after a woman entered the temple and offered oil on it, breaking its 400-year-old tradition.
Bharatiya Stree Shakti considers the act caretakers took as derogatory and insult to women and women hood.

Representives of BSS(Mumbai) met CM Devendra Fadnavis on 5th December 2015 to register their protest and submit an appeal to take concrete action so as to device a directive so that no Temples in Maharashtra ever treats women in a way that degrades a Woman’s self esteem. BSS Latur submitted a protest letter to the government representative there in Latur.

CM has said that State Govt has taken cognizance of it and considering the constitutional provisions Govt. will come up with relevant notification.