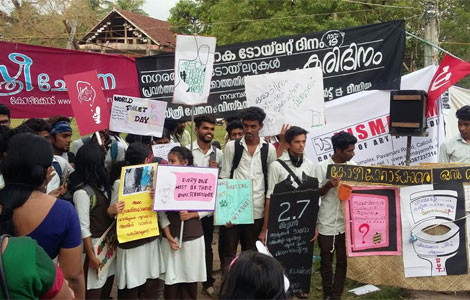 Stree Chetana in Kerala did a survey of status of Public Toilets in Kerala and demanded that the City Corporation provide better public toilets in the city.

Women, outside their homes, go to restaurants not just to eat or drink but also to use the toilets. The major reason for this the inadequate number of public toilets.

Until a camera phone was found hidden inside the woman’s toilet of a restaurant in Kozhikode in March, no one seems to have given serious thought to the necessity of safe public amenities and the lack thereof in the city.

One good thing that came out of the shocking incident is the debate it has led to on the need for better public comfort stations and other amenities in Kozhikode.

Several women’s organisations have demanded that the City Corporation provide better public toilets in the city. K.S. Jayasree, general secretary of Sthree Chetana, and K. Ajitha of Anweshi demanded that building owners provide toilets for employees of business establishments functioning in their buildings.

The Ombudsman for Local Self-Government Institutions and the district administration also made interventions, thus forcing the civic body to look into the demand.