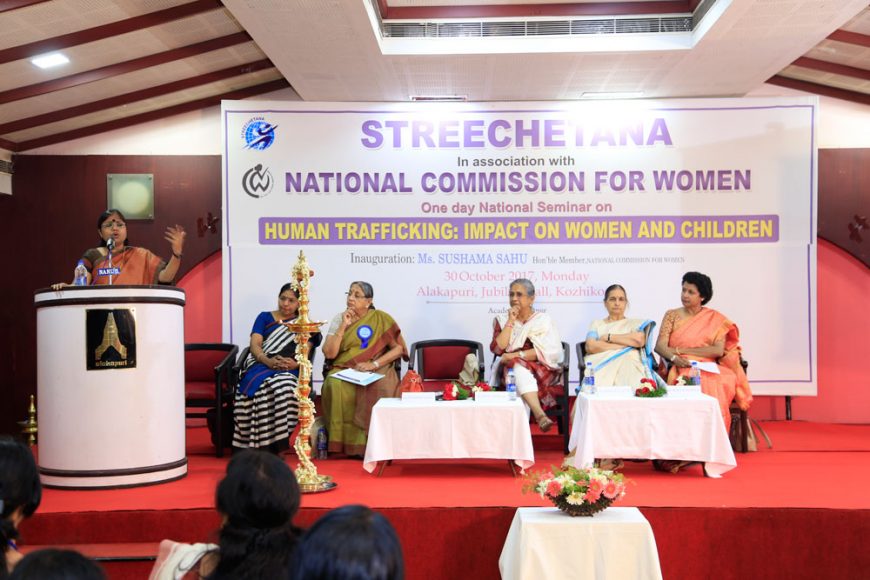 The crime of human trafficking has assumed a form of global epidemic, characterized by exploitation of humans beyond borders for financial and personal gain. Though women are the prime targets, children and men also fall victims. Streechetana, a women’s organization in Kozhikode, Kerala (affiliated Bharatiya Stree Shakti) jointly with NCW held a one-day National Seminar on “Human Trafficking: Impact on Women and Children” On 30th October 2017. The objective of the seminar were- To facilitate creation of a platform to bring together members from varied forums to deliberate on this growing crime of human trafficking, particularly in relation to disasters and migration; to focus on the nature of trafficking, its causes, risk factors for victims, ; to urge the need for collaboration of all concerned stakeholders  in prevention and prohibition of  crime; to help provide speedy rehabilitation measures for victims; and to disseminate related information among the public.

At the inaugural session, in welcome address by General Secretary, Streechetana and National President Bharatiya Stree Shakti, Dr. K S Jayasree shared activities by BSS and objectives of seminar.  In her presidential address, Radha Iyer, Director, Streechetana, said that the menace of trafficking can be curbed only when society is vigilant.  Hon’ble National Commission for Women Member Ms. Sushma Sahu, detailed about the increasing incidents of trafficking in India. Ms. Nirmala Apte, Founder of Bharatiya Stree Shakti, who was the guest of honor, said that BSS has worked with NCW earlier on several problems.   It is the responsibility of family and the society to give pro-active support to tackle trafficking. To deal with this, multi-disciplinary and participatory approach is needed with joint cooperation of Govt., NGOs and all other stakeholders. Ms.Preeti Patkar, Founder of Prerana, Mumbai gave the keynote address. She said ‘all violence against human kind is preventable by awareness building, strengthening legal system and providing sustainable rehabilitation to the victims’. Dr. Moly Kuruvila, Director, Department of Women’s Studies, University of Calicut spoke of the need to have special awareness session for parents in her felicitation address, followed by Vote of Thanks by Dr. K. P. Asha.

In conclusion, need for more awareness programs and research in human trafficking with strict State action plan in disasters, arrangement for more shelter homes, strong support system for rehabilitation needed for victims- are the few suggestions. Finding weaknesses and strengths of legal framework and law enforcing agencies and suggestions for modifications are of prime importance. So that stringent punishment to offenders will be given. Bringing speedier justice to stigmatized victims and identifying better ways to rehabilitate them will improve their quality of life.  Total coordination of academia, legal machinery, police, media, NGOs and civil society should be emphasized to root out this evil for promotion of a peaceful society. Prevention and prohibition of trafficking and rehabilitation of victims is of prime importance.